amaSAN is a worldwide unique herbal dietary supplement enhanced by a biophysical process. It contains Hydrastis canadensis, Caesalpina bonduc and a hybrid of Ocinum kilimandscharicum und Basilikum purpurascens. It has proven to be effective against Malaria. 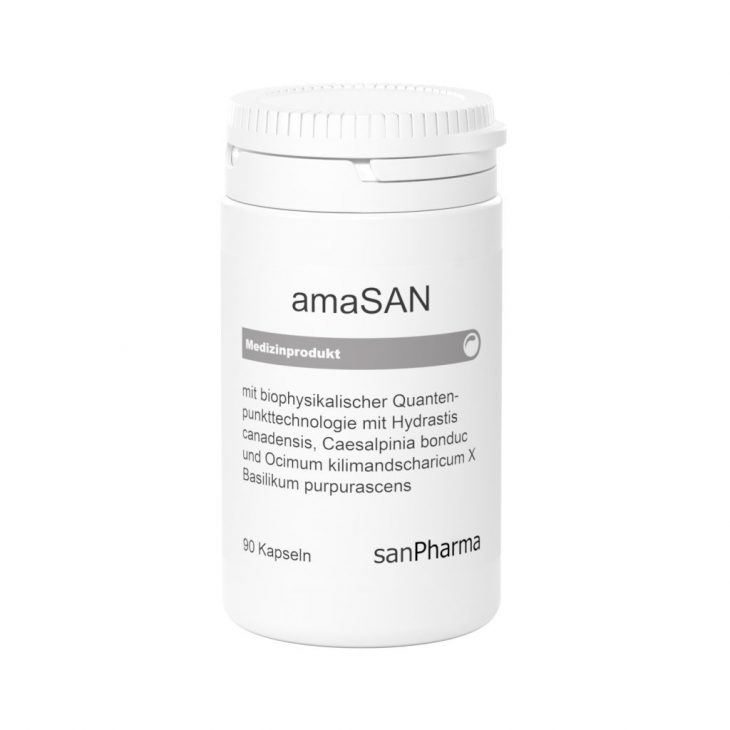 Mode of action:
amaSAN is a combination of two medical plants (Ocimum kilimandscharicum X Basilicum purpurescens; Caesalpina bonduc) with known activities against plasmodium species, and with golden seal (Hydrastis canadensis) that partly works on the cellular immune system and inhibits (mainly by berberine species) the efflux pump that causes a multi-drug resistance. A pepper extract (piper nigrum) acts as a bioactivity enhancer.
The single plant extracts are prepared as quantum dots (Gradl 2008; Gradl 2011) making very small quantities of the extracts possible.
One of the problems of malaria treatment is that plasmodium quickly can become resistant to drugs. By a membrane pump the reflux quickly enhances (Quellette, Légaré, Papadopolou 2001). This resistance shares many phenotypic features with multidrug resistance of mammalian tumour cell lines (Martin et al. 1987). By using Verpamil it was possible to restore partially sensitivity to anti-malaria drugs.
Golden seal being well known as an anti-malaria herb contains isoquinoline alcaloids like hydrastine, berberine, berberstine, hydrastinine, tetrahydroberberastine, canadine and canalidine. Golden seal can inhibit by some or all of them the cellular pump being responsible for resistances.
Ocimum species contain eugenol (1-hydroxy-2-methoxy-4-allylbenzene) being responsible for its action against plasmodium (Prakash, Gupta 2005). Caesalpina species contain diterpenes of cassane and norcassane types with activity against plasmodium (Linn et al. 2005).

Mode of action:
For RA several pathogeneses are discussed. Mostly accepted is the assumption or significant participation of an immune pathogenesis. T-lymphocytes activate synovial macrophages, secreting inflammatory cytokines TNF-α and IL-1, causing by that way osteoclasts and chrondrocytes to destroy cartilage and bone in a pincer movement. In a vicious circle chondrocytes produce big quantities of FGF and GM-CSF who again stimulate macrophages. The control is performed via the HPA-Axis (Turnbull, Rivier 1999) where IL-1 and TNF-α stimulates the formation of CRH in the hypothalamus. CRH causes in the pituitary gland the formation of ACTH, which causes the adrenal cortex to produce corticosteroids.
There are two possibilities. In one case the pituitary gland reacts to CRH and AVP excretion of the hypothalamus by promoting the inflammatory reaction by prolactin and MIF. In the other case the adrenal cortex is caused by ACTH to produce cortisol and DHEAS (Cutolo, 2002). In this way a positive feed-back reaction can be avoided in which IL-6, IL-1 and TNF-α from the inflammation stimulates the hypothalamus. This mechanism seems to play an important role in rheumatic diseases. Instead of using corticosteroids for RA-therapy for some years blockers of TNF-α (Anakinra; Kineret) are used. It is supposed that by using cytokine-blockers less side effects can occur than by using corticosteroids. On the other hand blocked cytokines also play an important role in other parts of the body beside of RA-inflammation. Susceptibility to infections is higher during this therapy. Research of Aggarwal (1999) und Mukhopadhyay et al. (2001) showed that natural substances like curcumin (from curcuma roots) can inhibit the formation of cytokines. The mechanism is an inhibition of the activation of NFκB-transkriptionsfactor. The phytotherapeutic use of other pungent flavours in RA-therapy like gingerol from ginger or eugenol from cloves may be based on the same effect.
Pungent flavours used orally in higher concentrations or for a longer period can cause unpleasant side-effects Therefor they are used as quantum dots.